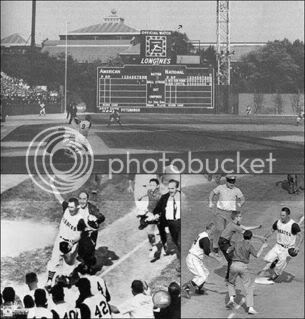 William Stanley Mazeroski was born September 5, 1936 in Wheeling, West Virginia. Before Maz entered school, his coal miner father Lew moved the family to rural Tiltonsville in Ohio, where they lived in a one room house without electricity. His dad, though an alcoholic, found the time to teach his son the basics of baseball.

He attended Warren High School and starred in both baseball and basketball. He started on the varsity baseball team as a freshman and took his basketball team to the state finals as a 5' 11-1/2" center. Warren HS has since consolidated to form Buckeye Local High School. Buckeye HS honored him in 2003 by naming their new baseball field after him and dedicating a Maz monument behind home plate.

As a 17-year-old in 1954, Mazeroski signed with Branch Rickey and the Pittsburgh Pirates straight out of high school. Originally penciled in at shortstop, he was quickly moved to second base and made his debut in the show on July 7, 1956. Maz would spend his entire career (1956-72) with Pittsburgh. He claimed two World Series titles and was elected to the MLB Hall of Fame.

Mazeroski's calling card was his leather and he earned his first of eight Gold Glove Awards in 1958. He helped turn 1,706 DP's in his career, and handled 11,865 plays with a fielding percentage of .983 (the league average was .976) - and on Forbes Field's notoriously rugged infield yet. The ball barely seemed to touch his beat up mitt before it was on its' way to first base.

Former Pirates centerfielder Bill Virdon told ESPN, "Nobody ever played second base like he did, and I've been in the game 50 years. The impressive thing about Maz was that he did everything perfectly. I backed him up for 10 years and never got a ball."

And Maz one was one of the tougher batters to strike out, finishing in the NL top ten in that category 8 times. He credits Danny Murtaugh's patience (Bobby Bragan, his first manager, would pull him for a pinch hitter in a heartbeat) and hitting coach George Sisler's advice to stay deep in the box and wait on pitches for making him a competent major league hitter.

During his heyday between 1957-68, he drove in more runs than any other middle infielder in the business. In those 12 years, he accounted for 756 RBIs, an average of 63 per season. Not too bad for a guy hitting out of the eight hole. But he always was a money hitter in the clutch.

There weren't very many highs and lows with Maz. What you saw is what you got, day in and day out. And what Maz had was good enough to earn a spot in 10 All-Star games.

In the 1960 World Series, Maz hit the shot heard 'round the 'Burgh off New York Yankees pitcher Ralph Terry. "I don't know what that pitch to Mazeroski was. All I know is that it was the wrong one," Terry told Mike Aubrecht in the book "Yankee Killer."

It was the first time a World Series had ever been ended by a home run. It's still the only Game 7 walk-off home run in World Series history. To this day, it's the defining moment of Mazeroski's career and one of the shining moments of Pittsburgh sports.

Ted Szafranski, 13 at the time, caught the famous home run ball. He gave it to Maz in exchange for two cases of beer (presumably for his dad, but who knows?) Times have changed. We wonder what that horsehide would fetch on E-Bay today? The ball has since found a proper home in Cooperstown.

Today, part of the left field wall from Forbes Field remains standing, along with a marker where Maz's homer cleared the wall as a historic monument on Pitt's campus in Oakland. A little league diamond behind the wall is named Bill Mazeroski Field. Every October 13th, Bucco die hards still gather around those few red bricks and replay a tape of game 7. Maz even shows up sometimes.

That famous blast overshadows the fact that Mazeroski also hit a home run that decided the outcome of Game One. In the fourth inning, his shot off Jim Coates provided the deciding runs in a 6-4 victory. The Pirates hit four home runs in the entire Series; two were by Maz.

He hit the game winning homers in the first and last game of the Series. In fact, he was the honored with the Babe Ruth Award for the 1960 World Series - take that, Mickey Mantle! But he didn't get the Series MVP - that went to Bobby Richardson, his Yankee counterpart. We trust the championship ring was a suitable substitute.

Maz holds the MLB career record for double plays by a second baseman with 1,706, and set the single season standard in 1966 with 161. He led NL second basemen in double plays a record eight times; in chances accepted another record eight seasons; and in assists a record setting nine times, including five straight (1960-64) for another NL mark. His 163 games at second base in 1967 set the MLB record, and he tied the NL record of five seasons with more than 500 assists.

Pirates broadcaster Bob Prince nicknamed him "The Glove". That's one moniker from the colorful Gunner that everyone understood.

Mazeroski was elected into the Baseball Hall of Fame in 2001 after a 20 year wait. Reading his speech, he only got as far as thanking the Veterans Committee for choosing a player because of his glove rather than bat before becoming teary eyed. He had to stop and apologize to the fans.

He said "I want to thank all the friends and family that made this long trip up here to listen to me speak and hear this crap. Thank you very, very much. Thanks everybody. That's enough." He then sat down, choked up and emotionally drained.

The audience and his fellow Hall-of-Famers stood and roared out their appreciation for the quiet man, who's career was finally validated by the HOF selection. It took the Veteran's Committee just one vote to correct the error the Baseball Writers had made over the past 15 years in bypassing Maz.

Mazeroski received another standing ovation from the city's fans on July 10, 2006 when he threw out the first pitch of the Home Run Derby that preceded the MLB All-Star game at PNC Park. Those young lions can only dream of matching his feat.

He serves as special infield instructor for the Pirates in spring training. You can see Maz standing in between Jack Wilson and Freddy Sanchez on a Pirate City infield, dropping pearls of wisdom to today's middlemen. It must be rubbing off. The duo is turning DP's at an almost Maz/Gene Alley-like rate.

He lives in Panama City, Fla., with his wife Milene, whom he met through Danny Murtaugh and married in 1958 (Buc pitcher Bob Purkey was the best man.) Maz spends his time playing golf and fishing for striped bass. He does a local TV spot or two, and coached a bit for the Pirates and Mariners. His son Darren is a retired junior college baseball coach.

The golden years have been good to Maz. John Bird even penned a book about him, "Twin Killing: The Bill Mazeroski Story."

Bill Mazeroski may have been #9 on the roster, but he's still #1 to generations of Pirate fans.

(Our contribution to spring training will be highlighting the careers of the old Bucs in camp who are trying to pass on the torch to today's squad. Up next - the Rubber Band Man.)
Posted by Ron Ieraci at 7:23 AM